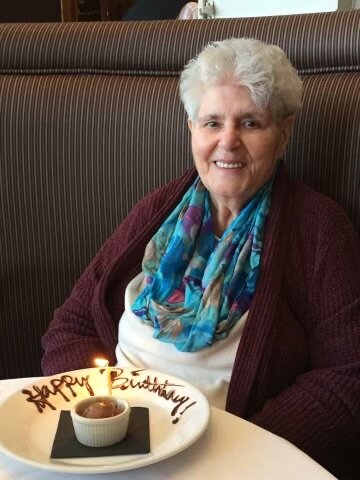 Please share a memory of Anna to include in a keepsake book for family and friends.
View Tribute Book

Anna Maria Chernick was born to Italian immigrants, Sal and Grace Melisi, in Brooklyn NY in January of 1931.  After losing both of her parents at the age of 3 years old, Marie grew up in several NYC orphanages with her sister Rafaella and brother Sal.  Her oldest sister Lena passed away at 14 months old.  One day while waiting to meet a boy for a date at the movies, she met another handsome young man who came to tell her that her original date would not be showing up. Marie would fall in love with that handsome young man, Alfred Chernick.  Al and Marie would eventually marry in Brooklyn on April 15, 1951.

After moving to Long Island they would have four children, Christopher, Virginia, Elizabeth and Kathryn. Marie raised her children and worked many years as a switchboard operator, proudly moving up to supervisor.  Marie also managed a record department, enjoying meeting many recording artists, which generated her enjoyment of music, most especially Frank Sinatra, she even played the snare drum in high school, for which she was always proud.

Embracing the opportunity to retire early, Marie spent her time enjoying watching her children’s families grow, eventually welcoming 10 grandchildren, Michael, Kelly, David, Brandon, Paul, Joseph, Kevin, Kyle, Matthew and Ivo.  She had many hobbies, especially creating magical afghans and other crocheted items.  She’d spend hours making blankets for her friends, her family, charities, fundraisers, her future great grandchildren and to support her craft fair business.  Marie and Al spent many summer weekends selling their homemade items at large fairs across Long Island.  In between time at their beloved Eagle Lake getaway in the Poconos, Marie and Al would wake up early and share their talents with people from all over Long Island.

After moving to Florida, Marie and Al began to focus on more time with their family.  Sadly, Marie lost the love of her life to Alzheimer’s disease in January of 2002.  Marie longed to be reunited with her husband, but spent the next 20 years living on her own, close to her family, taking care of her Yorkie , “Honey,” and enjoying her most beloved gift, her great grandchildren.  Blessed with four of them, Taylor, Jason, Anthony and Frankie, “Gigi” adored spending time with them and watching them grow.  Family was everything for Marie.  Beginning her life without a solid family environment, she spent her almost 92 years building an amazingly loving family of people who learned everything from how she lived her life and loved everyone unconditionally.

She is finally reunited with her beloved Al and will continue to watch over all of her friends and family.

Cremation Will Be Private

Share Your Memory of
Anna
Upload Your Memory View All Memories
Be the first to upload a memory!
Share A Memory
Send Flowers