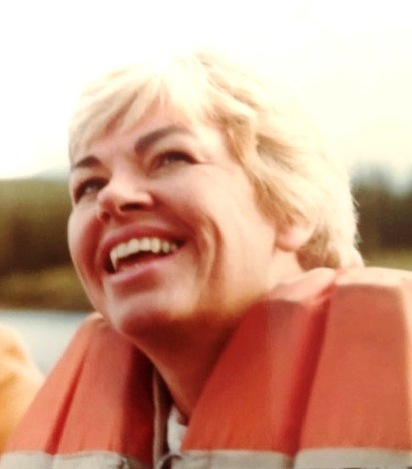 Marie Jeanne Stubenrauch, known as Jeanne to family and friends, died on Friday morning, May 13, 2022 at Good Shepherd Hospice, Mercy Medical Center in Rockville Centre, NY. She was 88 and had advanced dementia.

Jeanne was born in Brooklyn on December 17, 1933 to Marie (Lally) and John “Jack” Wood. The family, including Jeanne’s older brother, John, known as Jay, eventually moved to the Richmond Hill/South Ozone Park neighborhood of Queens.

After graduating high school, Jeanne was working part-time in a small parish library at Our Lady of Perpetual Help Roman Catholic Church when she met James Edward Stubenrauch, the man she would soon marry. He was nine years older than she was. The story goes that Jim’s younger sister Ann was the first to meet her future sister-in-law, after which she returned home and told her older brother that he should stop by the library and check out the young librarian who “looked like Audrey Hepburn.” Jim played it cool, but before asking Jeanne on a date, he made sure to ask a parish priest to check with Mr. and Mrs. Wood to see whether their daughter would welcome his attention. Jeanne and Jim married on September 10, 1955, and made a life together for more than sixty-five years until Jim’s death in January 2021. They raised three sons, James, John, and Paul, and both remained devout Roman Catholics all their lives.

Jeanne received a BA in History from Molloy College and worked for many years at Banfi Vintners, a wine-importing concern, but the focus of her life was as a wife, mother, and homemaker. She was an avid reader and enjoyed traveling, gardening, cooking the many vegetables that came from the garden, spending weekends at Jones Beach, and entertaining family and friends at home.

Jeanne was always active in her local parish and both she and her husband were long-time parishioners at St. Martin of Tours in Amityville. Jeanne served as both consolation and eucharistic minister and volunteered for many years in the parish’s outreach program.

Anyone wishing to memorialize Jeanne’s long life is encouraged to have a tree planted in her name (order online through an organization such as thetreesremember.com) or make a contribution to a favorite charity.

Funeral Mass for Jim and Jeanne

Inurnment of Jim and Jeanne

Share Your Memory of
Marie
Upload Your Memory View All Memories
Be the first to upload a memory!
Share A Memory
Send Flowers