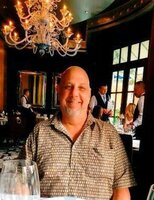 Michael Haffner was born April 25, 1959 and passed on January 3, 2022. It is with a heavy heart that we announce the passing of our father, Michael Francis Haffner after a courageous battle with cancer. He will be incredibly missed by his three sons, Michael (Angela), James (Jessica), Matthew and his granddaughter, Avery Therese. His loss will continue to be felt by his beloved mother, Joan Haffner, brother, Tommy; as well as many nieces and nephews. He was predeceased by his father, Francis Haffner and his sister Patricia Cutaia. Michael was a tremendous NY Mets fan as well as an avid Poker player. He competed in the World Series of Poker in Las Vegas. He was an incredibly hard worker and worked for Newsday for lmost 40 years. The wake will be at Powell Funeral Home, 67 Broadway, Amityville, NY 11701, Thursday, 7pm-9:30 pm and Friday 2pm-4:30pm and 7pm-9:30pm. Funeral Mass will be at Our Lady of Assumption, 1 Molloy St., Copiague, NY 11726 on Saturday at 10:15am.